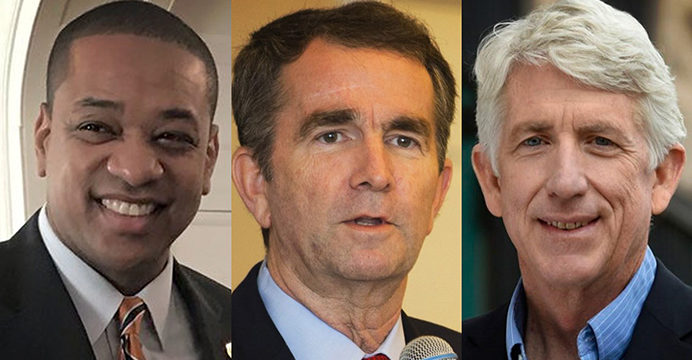 RICHMOND, Va. (AP) — Prominent Democrats came down hard on Virginia Gov. Ralph Northam after he apologized for a racist photo. But they were quieter as two more scandals — one involving race, another a sexual assault allegation — rocked Virginia’s statehouse.

The subdued response from national Democrats shows how their zero-tolerance approach has put them in a bind. The party has prided itself on policing its own and hoped to contrast that record with the GOP’s tolerance of misbehavior by President Donald Trump. Now the party will have to decide whether to stick with its principles or retain its political power.

“The party’s put in an odd position,” said Liam Donovan, a Republican strategist who, like much of the political world, watched Virginia’s developments with astonishment Wednesday. “Let’s say they live by their standards and clean house. The stakes are very real now because the line of succession goes through the other side.”

In a tweet Thursday, Trump accused Democrats of “killing the Great State of Virginia.” He predicted that the state, which saw Democratic gains in 2017 and which Hillary Clinton carried in 2016, “will come back HOME Republican) in 2020!”

Last Friday, a picture of a man in blackface on Northam’s medical school yearbook page surfaced. During a press conference Saturday, Northam insisted he was not in the yearbook photo but admitted he had once worn blackface. Virginia’s Attorney General, Mark Herring, said, “It is no longer possible for Gov. Northam to lead our Commonwealth.”

On Wednesday, the Democrat who would succeed Northam, Lt. Gov. Justin Fairfax, reeled from a detailed statement released by a woman who accused him of sexually assaulting her 15 years ago.

Later Wednesday, Herring, the Democrat who would succeed Fairfax, admitted he had worn blackface while in college.

If all three Democrats stepped down, Republicans would take over the state’s top offices. The GOP speaker of the House of Delegates, Kirk Cox, is in line to become governor, and the Republican-controlled House would select a new attorney general. That’s a different dynamic from recent efforts by Democrats to clean house.

In 2017, the party pushed Sen. Al Franken, a Minnesota Democrat, to resign after several women accused him of sexual harassment, but he was replaced by a Democrat. When interparty fury rained down on Northam after the photo came to light last Friday, it seemed likely he’d be replaced by Fairfax.

“The cost for Democrats of getting rid of the office holder are really low,” Seth Masket, a University of Denver political scientist, said of the Northam and Franken scandals earlier this week. “The real test,” he added, would be a scenario in which Republicans could gain a key political office.

Democrats did not seem to pass that test Wednesday. No Democratic presidential contender candidate issued any statement calling for the resignations of Herring or Fairfax, whose accuser, Vanessa Tyson, is represented by the same law firm that represented future Supreme Court Justice Brett Kavanaugh’s first accuser, Christine Blasey Ford.

South Bend Mayor Pete Buttigieg, who is exploring a Democratic presidential bid, told NBC, “I don’t know that this is a set of decisions we can automate because each of these cases brings different elements to it.”

New Jersey Sen. Cory Booker told reporters at the Capitol that “it takes tremendous courage for someone to come forward in the way that she did. This is a deeply disturbing allegation that should be thoroughly investigated.”

Former HUD Secretary Julian Castro, who was the first presidential candidate to call for Northam’s resignation, told MSNBC it was important for the party to confront the issue. “This can be painful,” Castro said. “But I’m confident that at the end of that day, what we’re going to have is not only a stronger Democratic Party, more importantly we’re going to have a stronger country that lives by these values of respect for everybody.”

Part of the reticence to talk was clearly the speed at which the allegations surfaced. Northam’s inner circle was taken aback by how quickly national figures piled on him. The stampede became so pronounced that Herring himself called for Northam’s departure on Saturday after the governor, at a press conference, admitted he’d worn blackface before but denied he was the person in the yearbook photo.

State Sen. Barbara Favola, a Democrat, showed signs of weariness when asked about the new allegations Wednesday. “I have to think about this, I really do,” she said. “I have to take a breath and think about this. This is moving way too quickly. My goal is to be fair to everyone concerned.”

Democrats were also visibly frustrated that Republicans were capitalizing on the scandals. Cox, for example, said Herring “should adhere to the standards he’s set for others or lose credibility” and called the allegations against Fairfax “shocking.”

Guy Cecil, head of the major Democratic super PAC Priorities USA, was one of the earlier national Democrats to demand Northam’s resignation. On Wednesday afternoon, he tweeted: “The past actions of Virginia’s leaders are abhorrent, but many Republicans around the country are engaged in modern-day Jim Crow voter suppression. They need to sweep their own porch before sitting in judgment of another.”

Sen. Tim Kaine, a Virginia Democrat who is close to Northam but has called for his resignation, acknowledged the frustrations of other members of his party. He told reporters in the Capitol that he couldn’t judge yet what should happen to Fairfax or Herring but that Democrats shouldn’t worry about the political consequences.

“When the politics are bad — and they’re bad — and everything else sucks, as it does now, just follow the principles,” Kaine said. “Just ask, ‘What is the right way to treat people?’ And that actually makes it clearer.”